The BBC’s Apprentice is one of the toughest and longest job interview processes in the world – and the stakes are high with contestants fighting it out for a £250,000 investment from one of the UK’s most successful self-made millionaires, Lord Sugar.

While you could argue that the show has become more geared towards entertainment in recent years, there is still a lot we can learn from it which can be applied to real life job interview situations. Especially when it comes to the brutal boardroom battles that have left many candidates flustered and speechless before being ushered home in a taxi.

Using business jargon or “corporate guff” as Lord Sugar sometimes calls it, is a very easy way to alienate yourself from an interviewer. Phrases like “blue sky thinking” and “core competency metrics” are sometimes used by candidates in an attempt to appear intelligent, but they often have the reverse effect. This type of jargon can leave interviewers feeling a bit puzzled and they will assume that the candidate is simply trying to fill a lack of knowledge with over- elaborate phrases and clichés.

If you want to build a strong relationship with your interviewer and break down the communication barriers, then talk to them like a real person and explain what value you can bring to them in simple yet professional English.

We all know that you have to sell yourself in a job interview but there’s a fine between confidence and arrogance that you should never cross. Elle Stevenson from this year’s series claimed “I hate anything mediocre… I’ve never been that person that comes second”, however Lord Sugar did not agree and fired her in week six after a poor performance in a buying task. She talked the talk but she couldn’t walk the walk.

Yes, you should endeavour to highlight your skills and achievements in a job interview, but back your claims up with evidence and don’t make outlandish statements or wild exaggerations – they may come back to haunt you very quickly.

Interviews can be tough and employers will always be keen to delve into your weaknesses as they try to build a full picture of your skills and knowledge. We often hear Lord Sugar say things like “who is to blame for the failure of this task?” or “what went wrong on this task?” Many contestants shy away from these questions in an attempt to avoid confrontation but that doesn’t go unnoticed by Sugar. He prefers a candidate who can recognise mistakes, take responsibility and demonstrate that they won’t make the same mistake again.

If an interviewer is quizzing you on you your weaknesses, then make sure that you meet the questions head on and explain how you can manage your skill gaps to ensure that they don’t have an adverse effect on your performance – and explain what steps you are taking to improve your abilities in that area.

When it comes to The Apprentice’s interview stage, a contestant’s lack of preparation is almost guaranteed to result in their firing.  In 2014’s series, Solomon Akhtar entered with a poorly prepared business plan and it didn’t go down well at all with Lord Sugar’s current advisor Claude Littner.  Claude branded Solomon’s two-page business plan a “bloody disgrace” and asked him to leave instantly – he was later fired by Lord Sugar.

When you are interviewing for your next career move, don’t leave anything to chance. Not only should you fully research the company in all areas relevant to your role, you should also take along some supporting documentation to back up your case for employing you; such as performance figures, awards and media mentions. You can even research the interviewer on LinkedIn to get a better idea of their background and current role.

Nothing annoys Lord Sugar more than somebody who rides on the coattails of somebody else’s success. In the boardroom, if a contestant says, “I’ve been on the winning team 5 times in a row”, Sugar will always reply with something like, “great, but what did you actually do in those tasks?” He looks for candidates who go out and make things happen. He doesn’t want to go into business with people who sit on the side line and take all the credit for other people’s hard work.

The same is true when you are interviewing for a role; the interviewer wants to know what you can personally bring to their organisation. So be careful when wording your answers and use the word “I” more often than the word “we” to show the actions that you’ve personally taken to contribute to the success of former employers.

Overall The Apprentice teaches us that competition can be fierce when a coveted role is up for grabs, so make sure you’re pulling out all the stops to show the interviewer why you should be hired rather than fired. 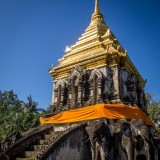 Andrew Fennell is an experienced recruiter, and founder of CV writing service  StandOut CV. He also contributes to a number of leading career pages such as The Guardian, Business Insider and Huffington Post.