We all know the daily struggle of going through loads and loads of resumes. Every now and then you might stumble across something incredibly awesome. So awesome, that the entire department eventually got to see it. That’s what we’re here for: we want to inspire you at all times, so we’ve summarised a few job advertisements that totally rock! Whenever you come across one of them, give the creator a round of applause and quite possibly offer him or her a job. So, let’s begin: roll the awesomeness!

If you thought you had to keep your language or intentions clean, think twice! This Swedish piece of advertisement has no chill! Yep, the most popular fast-food franchise, McDonald’s, is not holding back at all. This statement seems offensive and racist, but when you look closer it is the most non-racist ad. The true purpose of the ad is to include everyone, which makes the ad a great way to catch the attention of potential candidates.

This job description seems a bit odd at first glance. However, the minute you figure out it’s from Burger King, you’ll get the idea! Witty, right? A seemingly wrong heading that draws everyone in, only to be a dig at McDonald’s. It certainly grabs your attention, if you see this one. The black and white contrast is also pulling you in, because let’s be honest: who will make an ad with such bold and obvious mistakes? The actual message must be interesting then, right? It’s all about the psychological aspects in this recruitment ad!

We all know someone who’s going to solve this immediately. You know; the nerd of the class, the one that always paid attention. But that’s NOT a bad thing. Not at all! This job advertisement will rule out all the incompetent candidates, which should leave you with the right one eventually. Microsoft’s strategy will only lead those who can work with numbers to the HR department. Which is what we call smart thinking, literally.

4. The one in denial

The first message of this ad is, literally: DO NOT LOOK THIS WAY! So what do we do? We obviously are interested and taking a closer look. That’s our human instinct, since if there’s something we can’t have, we want it the most. Ever since Adam and Eve, we’ve been fascinated with everything that’s out of our reach. Forbidden = attractive.

10 of The Most Creative Recruitment Ads That Are Just A little Bit Cheeky via @SocialTalent https://t.co/ObpYw5guut pic.twitter.com/0TBerviZCn

At first this ad seems really plain, but old school. The visual look and feel are giving certain vibes. However, the QR code will catch your eye after a while. We all know QR codes are black & white, so we understand if you’re confused. That’s where the craftsmanship comes in. In order to apply, by scanning the code, you have to ‘tattoo’ it first! It will rule out those who are not able to fill it in with precision. The only truly talented will be able to scan the code in the end. Smart move from a Turkish Tattoo Shop!

A great recruitment ad and a great use of a QR Code. #recruitment #QRCode #Creative pic.twitter.com/IIQRIxnxKH

At the end of the day, loads of ‘creative’ advertisements can be tiring as well. That’s why there’s absolutely nothing wrong with an ordinary description. Keep the content relevant, updated and to the point and you’ll have an ideal candidate ringing your doorbell at some point. The message should be simple and maybe go a bit crazy on the design, depending on the role, since you don’t want to scare potential candidates off.

We are HIRING Home Based Part Time **Virtual Assistant** for a Review Company in Australia https://t.co/2srTvq9jai pic.twitter.com/A4h1hY6oGu

We can conclude from these few examples that one thing is important when you want to stand out from the crowd: Tone of voice. The way you persuade your audience to keep on reading or looking. Curiosity will trigger your audience to dig a little deeper. Tone of voice can be separated in the two types of content: text and visuals. Whether you go big on the text, visuals or both; always keep your job role and therefore audience in the back of your head. Hopefully you got the giggles from these examples, please let us know if you’ve found an awesome ad on the web somewhere! 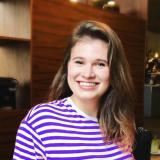 Head of UX at Link Humans, home of The Employer Brand Index.