There is a lot of great debate at the moment about the value of failure. Why it is important for businesses, managers and team leaders to promote the importance of failure in moving forward and why individuals need to embrace the concept of failure.

What I see through each of these, however, is that there is still a challenge in individuals feeling comfortable with the concept of failure. The concept that they will not achieve or succeed in something that they have been working so hard towards completing. The acceptance that this not only may happen but that it should happen. The realization that we need to work with our next generation to understand the benefits of failing at something.

We have really pushed against failure and the acceptance of the value of this for a long time. But let’s look at the reality of what failure means. We watch our children as they grow, in learning to roll over, learning to crawl, learning to walk. We watch over and over again as they try, but fail. This failure doesn’t stop them, they just try again. Eventually, they will succeed. When they do, we are the first there to congratulate them, to hug them, to promote to them what a great outcome; after all of these attempts they finally achieved what they set out to do.

So why do we stop promoting the importance of failure?

Many people would argue this point and say that we do this when we enter into mainstream education. In to an environment where a score, measured against a benchmark, is used to predict our success. Where the score is used to determine how good or how bad we went. I don’t actually agree it is just in the education, but it is in the way we handle the conversation of the score that starts to teach us that we can’t fail. So what if the conversation was changed?

How can we change the conversation?

Let’s use an example of when a parent sees a child’s report card. Many parents without realizing focus only on the positive, and then get frustrated with the negative. They say things like “why didn’t you try so hard in this subject?”, “Why didn’t you get a better result?”, “Did you not try hard enough?”

Have you ever considered what would happen if a parent you took a different approach? Asking the question in a way that promotes learning from failure? This could be as simple as “so you went really well in this subject, what was the difference in that subject to the one that you didn’t go as well in” or “what made this subject better for you than this one”?

Isn’t this what we all want in life anyway?

Now move to our roles as recruiters. What if we turned all of the processes on its head and wanted to see the challenges, wanted to hear about the negatives? What if we changed our expectations so that when someone came to us for a role, they provided their true career narrative, the one warts and all not the one about the wins and successes? We do get to this in an interview but imagine if the honest person came to us at the point of application and not after. Wouldn’t this allow us to understand how this person can contribute to a very changing work environment? Demonstrate the key attributes of resilience and adaptability?

How will this work in our own careers?

I will admit that failure doesn’t come easily to me and if I want anything to change we need to really know how to walk the talk. I personally struggle with the concept of failure and am the first to admit that this really challenges me.

But this does not mean that I don’t consider the options of failure, nor that I am not willing to accept failure. I know that from something that fails in my career, I will find an answer to how I might succeed, how I want to succeed. I will be able to assess against the foundation of what makes a successful career – what I am interested in, what work environment I want to work in, what responsibilities I want to have and what is the type of role I should be considering to achieve my career goals.

For this reason, I have to consider failure. I am not going to set out to fail just for the sake of it, planned failure does not provide effective learning and development opportunities.

I am going to consider that when something goes wrong, I have to ask myself what I can learn from that opportunity. What value has this provided me – and I have to be vulnerable and honest with myself to get the true benefit from it.

Where do you start?

The good thing about failure is that it doesn’t need to start, you just need to be open to the value of it if and when it does happen. Failure should not be negative and as a leader of your own success, and potentially a leader of others, talking openly about how people can learn from failure will create a culture of acceptance in having the conversation and being vulnerable.

Think about where you can bring this into the conversation early so that you can make a difference to someone’s future by using everything that they have learned throughout the process.

All of these experiences will build adaptability and resilience, which are necessary traits we all need for a successful future. In turn, this will also build a culture of innovation and a willingness to accept alternative approaches, experiences, and opportunities.

All you have to do is let yourself be open to the positive side of failure. 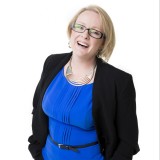 Rebecca Fraser is a Leader of learning and development for organisations and individuals. She is highly recognised for her contribution to the industry and for her work in the media providing information on modern day job search strategies. She is the author of ‘How to get a job in the 21st century’, her newest release on job search and resumes.