Most marketing professionals have a degree. Generally, the recruiter wouldn’t bat an eyelid as long as the education section in your LinkedIn doesn’t make claim to a PhD from the University of Life. At executive-level hires, HR probably won’t check your employment history either, and so a little hike in degree grade or institution isn’t going to crackle with deceit on the printed page; for the most part it’ll go under the radar.

A degree is not the be all and end all…

Why be pre-occupied with university at all? According to the Department of Business, the difference between entry-level salaries of graduates and those who didn’t go to university are at an all-time low. Enough people simply aren’t asking this question.

I’m interested in those that do; the degree-less CV will always catch my eye. Where candidates have forgone their presumed place at University and have achieved something in their formative years suggests mettle and imagination: two characteristics essential to talent at an executive or Board level.

But most recruiters just want a safe bet. They know what a safe bet is because a degree tells us just that. All recruitment is fee-based, and the logic of the recruitment consultant follows that the candidate they find most impressive will be the candidate that is most conventionally impressive (surely an oxymoron if I’ve ever heard one). This fallacy usually comes down to the recruiter’s inexperience in their particular sector.

“Safe hiring” is a habit that needs to be broken…

It does not help that “safe hiring” is an entrenched attitude in the UK. Those who aren’t particularly good at their job are able to nominally thrive in an organisation, working steadily to the top, where they’ll be in the position to hire like-minded – and ultimately unadventurous – candidates to fill their shoes. Often candidates are hired for a reason as simple as proficiency, which is as simple as a degree. Institutionalised averageness abounds, but then again, you’re rarely disappointed if you’ve set the bar at competent.

It follows that success is interchangeable with mediocrity, although fortunately, the two are not indistinguishable. A good recruiter can spot genuine talent, and a CV without a degree is often a clue. My ears prick up when I head to the education section and see – nothing worthwhile. I’ll then scan the page excitedly to see what the candidate has done instead. Whether they’ve had a stint in the army, trained to be an athlete or travelled to a distant corner of the globe to learn Pekingese, as long as they haven’t spent three years stacking shelves at a supermarket, they’ve got my attention. Not going to university can place a chip on your shoulder, and you’d be surprised how far that can advance your professional life.

Deciding your future at a young age…

At age 17, you’re asked to fork out thousands of pounds you don’t yet own to take a course that will inform – if not decide – your future career. And if you have the sense to see that, at this age, you might not be best placed to make life-defining decisions, and instead try to make something of the little you have, then you’re a step ahead. After having established your interests outside of university, you can poke your head round the door later in life. Education is wasted on the young anyway.

By their nature, universities process young talent and qualify worth by a common measure but real talent comes from being able to qualify your own worth. With the exception of vocational degrees, the experience needed to succeed comes from ingenuity, motivation, and hard work (in that order). Some people don’t want to get stuck in and prefer to exist as part of a pre-prescribed model, and there’s nothing wrong with that. Between their degree, their place on a graduate scheme and their middle management position, they’ll do just fine.

Where university used to be the preserve of the educated elite, they are now – for many institutions – run as an enterprise, which recognises its own role as a default setting for young adults. Their attendance is expected from their family, society and the government. By saying “stuff it” and achieving something besides, you’re blazing your own trail and you might have something genuinely interesting to say in interviews too, rather than singing from the same hymn sheet as the thousands of other graduates struggling to gain a foothold.

Life experience is often more interesting than a good education…

If you didn’t go to university and you invested your time and money into something else, you’re interesting. You can do new things, you can thrive in unfamiliar surroundings, you’re ready to take the reigns and control the business, take risks and move the organisation in the right direction.

In the field of digital marketing and Ecommerce, hundreds of executive and Board-level positions appear everyday. The market is one of the most highly changeable and potentially lucrative spaces to invest – and that’s why not going to university impresses me so much. By showing the ability to work outside of the norm, rather than simply being content with the present, you’re dreaming of new ways to decide the sector’s future. 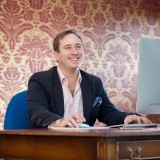 Patrick Tame made a name for himself as a recruiter in an emerging digital and ecommerce market after leaving the army, and went on to found the successful recruitment firm Beringer Tame, of which he is a director. Beringer Tame is now 10 years old and continues to work with the best digital talent and top brands.